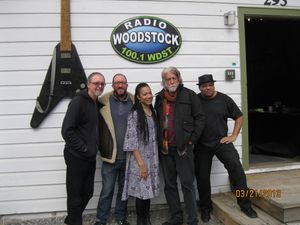 Martha and her band, with special guest John McKuen of The Nitty Griity Dirt Band visited Radiowoodstock for an interview and in-studio performance.  Their new album The Garden of Love  Songs of Wiiliam Blake is killer.  The words of the  mystical bard reimagined as old time mountain string band music. "it's as though the 18th century poet's work has been quietly waiting for Martha Redbone".  Give a listen at MarthaRedbone.com.
You can hear our interview here: radiowoodstock.com/audio-on-demand-detail&cat_id=&song_id=2686128866&cat_name=&circle_id=5806